I eat lunch every day. I typically go for a little walk and I think I’m just going to start talking to you about the painting industry as I do it. And so I really wish that you could be with me on all these calls that I conduct with painting companies every day, because I’ve done about 2,400. It may be 2,500 now. I’m not sure. And you can see I’m just walking around where my office is, which is basically in an industrial ghetto.

And when I’m on the phone with folks, I mean, I get the same problems over and over and over again in There’s nothing new in the painting industry, but let me tell you about a problem I get just constantly and it has to do with production rates. So when you open up your painting business and you stop being a crew leader and you start being an owner, you’ve got to figure out how long it takes to do something. And there are a number of ways that people try to do this. If I get ran over, at least you’re here with me in my last minutes. And normally there’s a few ways that people try to solve this estimating problem.

The first way they try to solve this estimating problem is just by damn guessing. “Well, I reckon that’s going to take four days,” which is terrible because if you got a three-man crew, that means you got 24 hours of variance. Another way they try to do it is they’ll have some kind of really weird square foot pricing. Sometimes it’s from the floor. Well, you don’t paint the floor. So if you’re in a room that’s all walls, you might make a lot of money with that square foot pricing. If you’re in a room that’s very ornate, it’s got tons of work to be done on trim< doors, windows, then it’s all messed up. Let me give you an example.

I had a guy yesterday who was charging like I think $2 a square foot on walls. And for some reason it included the labor and the material, which is a very odd thing. You should never combine those. And he was doing something like 75 cents per linear foot of trim. Now where he got these numbers, he couldn’t tell me. I don’t know if these are just numbers that float around at the paint store and people are like, “Okay, I’ll buy that. Sure.” Let’s assign that number to it. When we start doing the numbers, I start backing into what I know is a relatively acceptable production rate. And he was like getting paid $14 an hour on the trim and like $102 an hour or something like that on the walls.

So I’m like, “So you’re getting screwed on the trim. Your clients are getting screwed on the walls.” People just don’t know how long it takes to do something. So what you’re in the business of doing as a painting contractor is you’re buying labor wholesale and you’re selling it retail. That’s essentially what you’re doing. And so you got to know exactly how far an hour of a painter’s labor goes. And if you don’t, let’s say that you don’t know what it is. It just causes all these problems. Let me tell you about a few of them.

The first thing is people’s gross profit margins are all over the place. Well, the simple fact is most people can’t tell you how much money they made on any given painting job. They don’t do any job costing. Another issue or a problem that it creates is you can’t hold your painters accountable to do anything because you’re just guessing. You’re guessing, they’re guessing. You’re trying to hold them accountable to a guess. Now you’re all aggravated at them cause they went over budget or maybe because you don’t use production rates. You don’t even give them a budget. People can’t hit a budget if they don’t have one, they need to know labor hours. And days don’t work either because there’s just too much variance. A three-day job, somebody’s done half a day, that’s a one out of six variance. That’s almost 20% variance. Well, if gross profits are only 50%, you’re in trouble. And then finally another big issue that it causes is with subcontractors. Subcontractors always feel like they’re getting screwed. And most of the time they are because they’re having to go out and perform to a guess.

Now for some of you, you’re pretty good guessers. And if you got a subcontract model where you’re like, say for example, I’m walking back to the office now. Say for example, you do a 50% split, which is about where you need to be on everything. Actually, I think you should be a 50% split on labor and you should just buy the materials yourself and those are your own profits. That’s my opinion. Especially, if you’re in the painter’s purchasing group you can just make a boatload of money on materials and still save the client money far more than they get it at retail.

But if you don’t have those production rates put in, if you can’t save to a subcontractor, “Okay, how long is it going to take you to paint this swath of wall here?”

“Well, what if I give you an hour? How long is it going to take you to paint this linear feet of trim from here to here?”

And here’s another pro tip instead of guessing. When you go out to paint, try to paint that same thing for as long as you can uninterrupted. And by that, I mean, if you’re going to paint walls, go there, set up your drop cloth, get everything completely ready to paint, paint the walls, paint the walls for as close to eight hours, seven hours as you can. Get the drop cloth, pack everything up, get out to your truck, hit the stop button. Because what that’s going to do is give you a production rate for walls that also has the set up in it.

So the summary of all this is 2,500 assessments later, I’d say 85 to 90, probably more like 90% of the time I have to send new members a production rate module so that they can figure out how long it takes them to do things. And I do give them guidance on, “Hey, these are some production rates that I trust by people that I trust to put in the time energy and to make sure that this stuff is accurate.” But at the end of the day, you want to verify it in the field.

And so if you’re watching this video, chances are you got this same production rate problem. So you need to get out there and get it fixed. And the easiest way to do that is to make a list of the 20% of things that you paint 80% of the time, go out and paint those things for as long as you can, just one specific thing and then see how long it takes, collect some data on it, average it out, get your production rates. Very simple.

If you sold pizzas for a living, you wouldn’t yell back at the cook every time they were in the kitchen and they were cooking a pepperoni pizza and go, “Hey Bobby, how much does this pizza cost today, now, in the moment?” You wouldn’t be guess than that. No. You’d know how much cheese, how many pieces of pepperoni, what it cost for the flour, how long it took to make it. You’d probably divide how much of the volume that you did with all your overhead. You’d know how much your pizza cost, you’d put it on a menu and this is what the pizza cost.

But for some reason in painting, we just show up and guess and guess and guess, and they’re never right. And you may think, “Oh, I’m pretty good at guessing.” No, you’re not. You know how I know you’re not good at guessing? Because nobody is good at guessing. You can’t take a 10 foot board out to your backyard without a tape measure and cut it exactly 10 feet or six feet rather. You can’t do it. And so when you’re estimating these projects that have hundreds of measurements sometimes, at least dozens, those guesses just don’t end up working out.

So get your production rates put together, spread the word. So when I do these diagnostic calls with painting contractors, I don’t have to give them so much bad news. I’d love to give them some good news. Great. You’re already doing that. We can move on to something else and maybe that’s you. All right, this is first installment of Wandering Around with Brandon. I hope you’ve enjoyed it.

Production rates are on my mind because I did two called yesterday, both people had the exact same problems because of the exact same reasons. I’m trying to keep you from having it. Take care and talk to you next time. 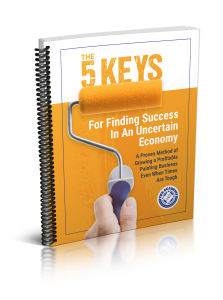 Download the 5 Keys to painting success!
Pam Bryant
a year ago
I first met Brandon several years ago at the Sherwin Willliams Pro Show. My "take away"... I was sitting up front, second row, and he asked...
Read More »
Brian Hoggard
a year ago
Brandon is the man! Just follow his easy guide and and he will have you doing things you never thought were possible. Great for any...
Read More »
Robert Godinez
a year ago
The videos are what lured me into his entire wealth of knowledge. Once I became a gold member I became bewildered by so much more...
Read More »
George Hamby
a year ago
I have been watching multiple videos over the past two or three years. As I watch these videos I get inspired to try to step my...
Read More »
Greg Spradling
a year ago
Brandon's advice is always helpful. I've followed Brandon's advice for 3-4 years now. And more importantly, Brandon is a man of character &...
Read More » Stressed About Being “Behind Schedule?” Don’t Be…

Home Advisor Leads “False & Phony” Says FTC – Do you use them?